In version 1.0, Virtual Computer offered the server tier as a pre-configured Microsoft Hyper-V platform with clustered virtual machines. In the new version 2.0 instead, NxTop Center comes as a virtual appliance that can be deployed on existing Hyper-V virtual infrastructures.
Customers may easily deploy the VHD image on a vSphere or XenServer infrastructure instead, but Virtual Computer only supports the Microsoft hypervisor at the moment. 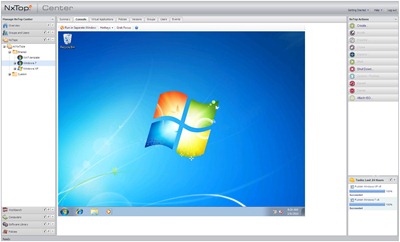 The client hypervisor instead is based on Xen, it doesn’t require the Intel vPro technology (like the upcoming Citrix XenClient and VMware Client Virtualization Platform), and features a remarkable user interface which offers capabilities to customize the virtual environment and intuitive switching between guest OSes. 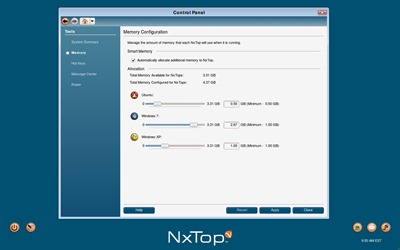 Of course the administrator can control all parameters remotely and decide to limit end user freedom at any time.

While the architecture sounds similar to the one that we’ll see in next generation VDI platforms announced by vendors like Citrix and VMware, Virtual Computer is not currently focusing on virtual desktop infrastructures.
Its use of hardware virtualization is much more similar to the one vendors like Kidaro and Sentillion (both acquired by Microsoft), and VMware with ACE, adopted with their security wrappers for hosted virtualization platforms.

NxTop 2.0 also introduces patching of a single shared image and patch delivery to one or more users or groups for testing, a solution to automatically migrate Windows XP user profiles to Windows 7, a hardware compatibility checker (to verify the presence of Intel VT), and support for multi-language.