As virtualization.info increases its coverage of vendors in the Infrastructure-as-a-Service (Iaas) cloud computing market, new startups enter our Radar, which will be soon updated to include a brand new category.

Today we cover a European firm based in Spain, Abiquo, which just relocated its HQ in Redwood City, California, leaving the R&D facility in Barcellona.

Abiquo secured a series of small rounds from multiple sources (Spanish government, angel investors and Kreos Capital) for a grand total of $5.1 million.

As expected by a cloud management platform, the Abiquo solution supports multi-tenancy (and control delegation), resource limits enforcement, a virtual machines catalog, and open standards (OVF).
It is also capable to be instrumented by multiple API directives, supporting programming interfaces from 3rd parties, including the VMware vCloud.
And just in case customers want to use a hybrid cloud approach, Abiquo can plug in public clouds like Amazon EC2.
The company claims that its infrastructure manager can handle up to hundreds of thousands of virtual machines.

While the solution doesn’t have a strong focus on security, it features a workload management engine, in charge of VMs dynamic provisioning for load balancing, that can be used to enforce security compliance (available only in the upcoming Enterprise Edition of version 1.5).

A key aspect of this solution is the capability to design the cloud infrastructure through a graphical dashboard: 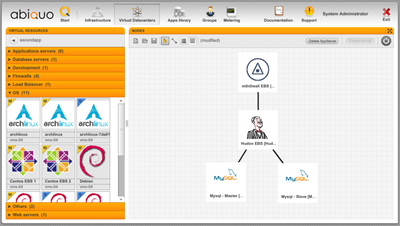 With version 1.5, Abiquo will also introduce the capability to migrate VMs from a hypervisor to another (for example from ESX to Hyper-V and vice versa) through a transparent virtual to virtual (V2V) migration.
This feature, available only in the Enterprise Edition, seems especially useful while the cloud computing industry still lacks of accepted standards that allow seamless migrations of VMs across multiple providers and their platforms of choice.

Last but not least, Abiquo 1.5 will have the capability to discover and save in its catalog the virtual machines found in new virtualization hosts that administrators add to the cloud infrastructure.

The open source, free edition of the product is limited and it seems more a virtual infrastructure manager on steroids than a proper management console for IaaS clouds, but it includes at least three valuable features: support for multiple hypervisors, multi-tenancy and basic workload balancing. 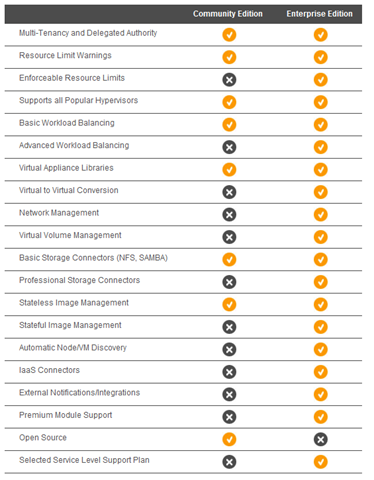