On April 27 VMware and Salesforce plan to announce a new partnership with a public webcast where both companies’ CEOs will appear. None of them disclosed any information about the terms of the deal, but an evidence spotted in Google Cache suggests that Salesforce may launch a VMware-powered Infrastructure-as-a-Service (IaaS) cloud computing facility, turning into a competitor for companies like Amazon and Rackspace (both powered by the Xen hypervisor).

virtualization.info is now able to disclose exactly part of what the two companies are going to announce.

There’s at least one 3rd party company that connects both VMware and Salesforce in some ways: CloudShare.

CloudShare is a US startup formerly known as IT Structures, managed by former Check Point, VMware and GE executives.
Founded in early 2007, it’s funded with $16 million in two rounds, led by Gemini Israel Funds, Sequoia Capital and Charles River Ventures.

The company offers a IaaS cloud computing facility which allows to provision multi-tier applications or entire data centers through a self-service portal. Customers can even import their existing virtual machines and replicate complex networking layout thanks to the fencing technology.
The virtual infrastructure can be accessed by a simple browser or through a dedicated VPN connection and RDP access.
It can be considered an evolution of hosted virtual lab automation (VLA) solutions like the ones offered by Surgient or Skytap. 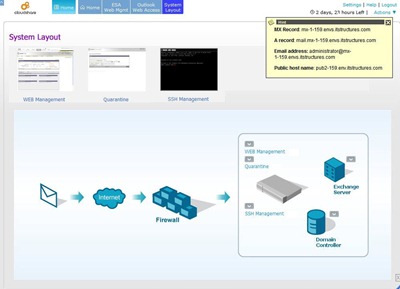 Designed to facilitate the activity of a sales channel, the platform is specifically tailored for pre-sales and post-sales activity (including demos, proof-of-concepts, training, etc.). 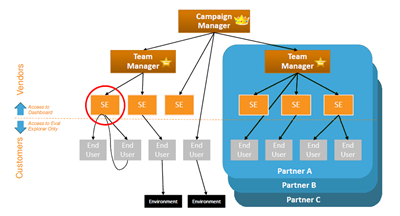 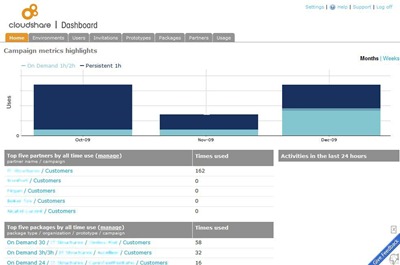 In many ways it seems to have a CRM approach to the fruition of the hosted virtual infrastructure and it’s not a case that the platform integrates with Salesforce.

So far CloudShare technology has been adopted by a number of customers including VMware, Cisco and SAP.
VMware and CloudShare are also business partners. The CloudShare platform is powered by vSphere and already supports the draft vCloud API specifications.

At today, CloudShare seems one of the very, very few concrete implementations of a IaaS cloud computing facility. And probably the most tangible one based on VMware technologies.

The key of the VMware and Salesforce partnership is in a couple of quotes on the CloudShare website.
The first one comes from Paul Maritz, VMware’s CEO:

“VMware puts great emphasis on giving customers a significant return on their IT investment and creates strategic partnerships with leading vendors to achieve this,” said Paul Maritz, president and chief executive officer of VMware. “With its unique capabilities and support for native VMware virtualization and the VMware vCloud API, we see the CloudShare platform as an attractive technology that strengthens, supports and extends our ecosystem.”

“Companies continue to explore how to move more business operations like presenting proofs of concept to the cloud,” said Kendall Collins, chief marketing officer, salesforce.com. “The addition of CloudShare to the AppExchange gives salesforce.com customers the ability to simplify how they present proofs of concept with a few clicks.”

And this is what VMware and Salesforce are going to announce: the capability for Salesforce customers to create and access on-demand VMware virtual infrastructures, hosted inside the Salesforce cloud, fully integrated in the CRM workflow, shareable across the organization, available 24/7 and accessible through a simple web browser.

Sources close to both companies confirmed to virtualization.info that this is the exactly the content part of the announcement and that CloudShare is the technology behind it.

Update: Apparently, there are parts of the announcement that are not covered above. One of them should include SpringSource. This article will be updated with additional details as soon as they are available.

Second Update: In the first phase of this partnership, the VMs offered by Salesforce won’t be available for raw access. They will likely be pre-configured to run the VMware/SpringSource application server: tc Server.
So end-users will just have the capability to upload Java code and host it at Force.com. The core part of the announcement will be about this aspect, while the presence of vSphere and/or CloudShare described in the article above may or may not be mentioned.

In a second phase, certainly not mentioned in the upcoming announcement, the “VMforce” platform will become more open and comparable (in terms of raw access to VMs) to what Amazon, Rackspace and others are offering today.