There’s a lot of interest around the US startup Unidesk, primarily because Ron Oglesby recently left Dell to join it as Chief Solution Architect.

Unidesk is a US startup founded in December 2007, funded by Matrix Partners and North Bridge Venture with a Round A investment of $8.1M and a Round B of $12M.

The company’s management team includes Don Bulens (President and CEO), who was the President and CEO of EqualLogic until Dell’s acquisition.
With Bulens there are: Chris Midgley (founder and CTO), the former Vice President of Digital Strategy at Iron Mountain, Jeannie Vineyard (Vice President of Engineering), who comes from Egenera (almost 6 years there) and Liquid Machines (3 years), Brian McDonough (Vice President of Sales), former sales executive at IBM in charge for the Watchfire product line, and Tom Rose (Chief Marketing Officer), the former Director of Worldwide Product Marketing at HP.

At the beginning of this week the company left the stealth mode, unveiling its patent-pending Composite Virtualization technology for VDI environments.

This product is trying to solve a major challenge in any desktop virtualization technology: the full portability of end-user environment personalization (sometimes just dubbed persona).
Despite that, Composite Virtualization isn’t a profile management solution or an application virtualization platform.

Unidesk decouples the operating system from the applications, and the applications from the user data and personalization without introducing an additional abstraction layer and file system/registry redirection like application virtualization solutions do.
What the company does is injecting a file system driver inside a VDI gold master image that transparently segments in the Windows C: drive into multiple, isolated containers.
Administrators can deploy one or more applications inside each container, and then containers can be assigned to multiple virtual desktops or multiple users. 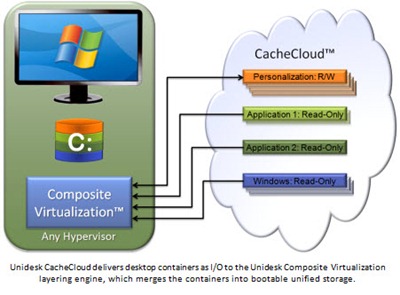 These containers use a technology that is more sophisticated than the NTFS Mounted Drive technology that Microsoft introduced in Windows XP/Server 2003.
Compared to that approach, where every file has to be stored in the same folder to reach a specific partition, the Unidesk transparent containers are able to group together files and registry keys independently on their default position inside the hard drive.

Containers can be read-only (for applications and the OS) or read/write (for the user data and personalization).
Most applications are supported, including the ones with kernel mode drivers that are impossible to package with application virtualization products. The trick that Unidesk uses is to include those drivers in the OS container rather than in a dedicated one. 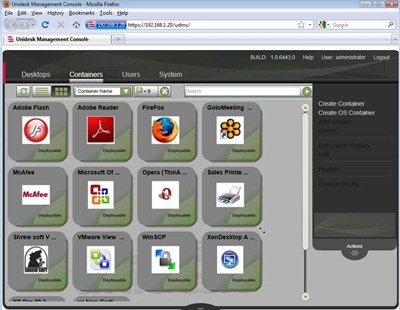 The uniqueness of this approach also lays in its architecture: the containers are not saved locally, but are stored in a dedicate virtual appliance deployed inside the virtual infrastructure, the CachePoint VM.
Every time the end user tries to access to a virtual portion of his C: drive, for example to read a document, the Unidesk file system driver redirects the call to the proper remote container.
Each CachePoint VM can serve a certain amount of virtual desktops, and it’s coordinated by a Master CachePoint appliance that stores special containers used for application packaging.
On top of that there’s an additional virtual appliance that provides the management console. 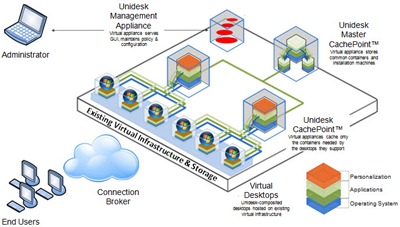 Unidesk plans to support multiple hypervisors (including ESX, XenServer and Hyper-V) and multiple connection brokers (including View, XenDesktop, Remote Desktop Connection Broker and the Leostream connection broker), but version 1.0 will only support VMware VI 3.5 and vSphere 4.0.
One thing it currently lacks is the support for offline use: if the CachePoint is unreachable for any reason then its containers are unavailable. But the feature will be introduced later this year.

The product is still in beta, and this should be considered a soft launch. Unidesk plans to deliver the GA version later this year.