The always amazing AnandTech already published an extensive review, including some very interesting benchmarks, measured on VMware vSphere and Microsoft Hyper-V with VMmark and vApus Mark I frameworks. 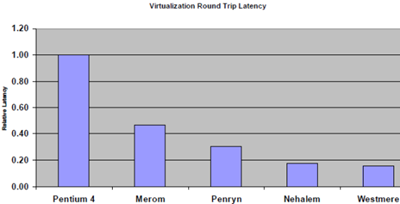 AnandTech reports that also the Translation Lookaside Buffer (TLB), a CPU cache used for virtualization, has been improved:

With many VMs running on top of a hypervisor, flushing the TLB each time you switched to another VM or to the hypervisor was a costly operation. So the TLBs of the AMD Barcelona cores got a new VM specific tag, called the Address Space IDentifier (ASID). An ASID field was added to each TLB tag.  Intel followed this example more than a year later with its Nehalem CPU. The ASIDs allow the TLB to keep track of which TLB entry belongs to which VM. The result is that a VM switch does not flush the TLB.

Completely exotic is the support for 1 GB pages. 2 MB instead of 4 KB pages make a lot of sense to avoid overwhelming the TLB. But 1 GB pages seem a bit exaggerated until we count our internal RAM in TBs. I was told that a few very exotic HPC applications would be sped up with this. 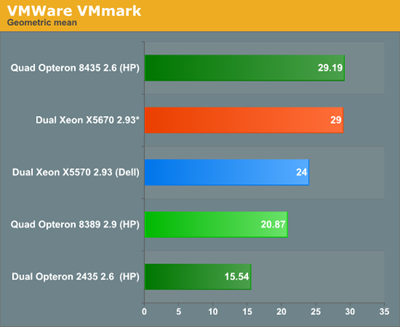 AnandTech even tested against its own, independent benchmark framework called vApus Mark I, launched in May 2009.
Because this platform is not subject to the non-competitive constrains that VMware has in its EULA, AnandTech was able to use it to compare Hyper-V and vSphere:

This is the first time ever the publication discloses benchmarks about Hyper-V.

The review, which is a highly recommended reading, ends with a rather interesting conclusion:

Running 8 very heavy VMs requiring 24 virtual CPUs runs still best on the Intel Xeon on ESX. When it comes to Hyper-V, the difference is a lot smaller. So for those of you who want to consolidate on Hyper-V, we would advise you to wait a few more weeks. Octal cores from Intel and AMD and twelve-cores from AMD will make the next server CPU comparison much more tense.