A new US startup entered the virtualization market in mid-February: Virsto.

Founded in 2007 and sustained by a $8.5M investment led by August Capital and Canaan Partners, the company is managed by Mark Davis, former CEO of Creekpath Systems (acquired by Opsware, which was then acquired by HP). Davis also served as Vice President of Marketing at Monosphere, acquired by Quest.

This team developed a solution to improve efficiency and performance of Hyper-V virtual machines, by hijacking and optimizing their interaction with the underlying storage.

Virsto One in fact is a lightweight solution (10Mb) that installs inside the Hyper-V parent partition and places a filter driver between VMs virtual hard drives (VHDs) and physical volumes (no matter where they are and what storage protocol is used to reach them).

To hijack VMs I/O stream, Virsto creates fake VHD files (this is done through a snap-in for the Hyper-V console) that administrators must map to virtual machines in place of standard Microsoft VHDs.
Nor the virtual machine neither its guest operating system recognize the difference: the Virsto VHD containers have the same properties of standard VHDs.
What happens behind the scene is that all the data a VM saves inside a fake VHD is actually redirected to the Virsto filter driver, which optimizes it before sending it to the physical storage volume. 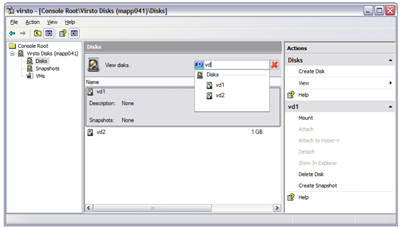 The optimization Virsto is talking about here consists in three things:

In some way this could be considered an approach similar to the one VMware took with its Consolidate Backup (VCB) proxy.
The difference is that while VMware is discontinuing VCB, Virsto is so confident about the approach that it claims storage costs can be cut by more than 50%, achieving 3x-5x server consolidation ratios than with VMware.

Virsto One is licensed per server, with pricing starting at $1,250 (for up to 2 sockets) and reaching $5,000 for unlimited sockets.

The decision to support Hyper-V rather than ESX at its first release is quite interesting and definitively different from what the large majority of virtualization startup do at launch.
This choice may depend on technical issues to hijack the access to VMware VMFS volumes, but it’s clear that Virsto is trying to leverage the opportunity to be the first player in a market where there are no competitors.
Of course the big risk for the company is that Hyper-V will never be adopted by the kind of customers that have the storage problems Virsto is trying to solve.