Red Hat signed a partnership with the Israeli startup InstallFree in H1 2009, but so far the company didn’t push too much the idea of application virtualization and VDI together.

InstallFree launched in April 2008, when the application virtualization market was already under consolidation thanks to the acquisitions of Microsoft, Symantec and VMware.

Bridge is able to create autonomous (agent-less) virtual applications which can be updated or incrementally patched without the need to re-virtualize them.
The customizations that users may decide to apply to a virtualized app are saved in dedicated encrypted files, which can be saved and redistributed, and which are not impacted when the application is updated.
Additionally, InstallFree offers a centralized management console, which fully integrates with Microsoft Active Directory, and uses it to distribute the virtual apps to corporate users.

The company secured over $10 million in two rounds of investment and hired a few seasoned executives from Kidaro, Softricity and Thistall.

Red Hat is now promoting the InstallFree Bridge solution as part of its Enterprise Virtualization for Desktops (RHEVD) platform, just launched in beta: 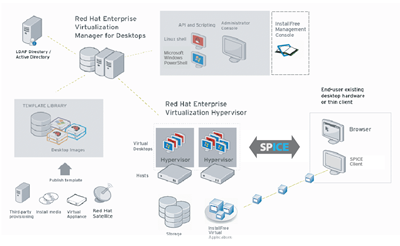