Two of them are defensive, one is not:

At the beginning of February Citrix sponsored a competitive analysis performed by Miercom.
The 7-pages report compares protocol performance of Citrix XenDesktop 4 (with ICA/HDX) and VMware View 4 (with PCoIP) and these are the conclusions:

Flash video was delivered with an average of 65% less CPU usage, 89% less bandwidth, and excellent Quality of Experience by XenDesktop 4 compared to View 4

VMware answered last week, informing that they were not contacted by Miercom and that they have no insight about how test were conducted.
Of course VMware offered its point of view on each point,

At this point customers just have to decide which company has the nicest logo and which guy has the brightest smile to believe to one set of claims over the other.
Luckily, Brian Madden jumps in and provide an impartial, long, detailed analysis that definitively is worth a read.

At the beginning of March, a blog independently run by VMware employees published interesting speculations about the sales volume of Citrix Essentials for Hyper-V.

The article, written by Michael Hong, Senior Product Marketing Engineer, suggest that Citrix so far sold a very, very low number of Essentials for Hyper-V, because he apparently was the first one to recognize a major bug in the Workflow Studio setup.

Workflow Studio is part of the Essentials suite and the issue Hong encountered prevents its installation, but the Citrix support didn’t solve the issue and closed Hong’s support ticket without reasons.

Hong also notes that Citrix doesn’t have more than a bunch of posts on the its support forum about Essentials for Hyper-V.

This is an old classic.
At the beginning of March VMware decided to cover a cost comparison table that Microsoft recently published. 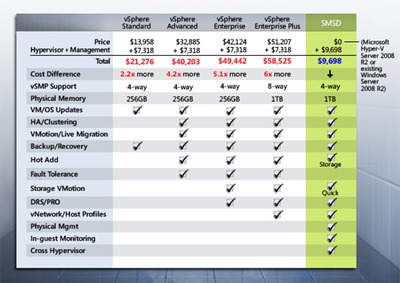 Of course there are a number of issues in the comparison that VMware pointed out.

In some cases VMware is completely right in highlighting how Microsoft doesn’t detail enough the difference between implementations of the same feature (vSMP support for example).
In other cases VMware wants Microsoft to drop comparison between some features because they are too different (VMware DRS vs Microsoft PRO for example) but here’s the a lot of room to debate.

While totally misleading, the sense of those marks is more like “We have this feature. The customer can use it in some way”.
Is it possible to pretend that a simple comparison table like this one (or the ones that VMware produces) offers an insightful qualitative analysis of implementation cost for each listed feature?
The customers that are looking for such in-depth side-by-side analysis aren’t going to research more on their own? Are they supposed to make their purchase decision just looking at this chart?

This is way the whole “my product is better than yours” marketing effort is a complete waste of time.