This month the VMware’s competitive department has been particularly active, commenting on Citrix HDX performance and Essentials for Hyper-V sales volume, as well as the cost of managing Hyper-V, and its stability.
Citrix just answered back, in two ways.

First, the company highlighted how VMware recently released a patch for ESX just to improve its score in a specific scenario, Terminal Services workload on Intel 5500 CPUs when Hyper-Threading is enabled, benchmarked by the independent framework Project Virtual Reality Check (VRC):

It took us some time to understand the reason for these results, but we eventually identified a very specific condition where ESX’s scheduler enforces fairness in scheduling vCPUs at at cost of throughput. ESX’s scheduler has long be subject of the intensive scrutiny of a large number of VMware engineers to guarantee fair access to the processor for each virtual machine. It is because of this fairness that VMware’s customers can rely on CPU resource controls. But, when fairness goes too far, throughput may be sub-optimal.

The patch release has two effects, says Citrix: on one hand it validates Project VRC as a reliable benchmark platform, on the other it demonstrates the flaws of the VMware EULA, which prohibits to publish any ESX benchmark without submitting the results to the company for review and approval.

To further hit VMware on this front, Citrix just published the results of an internal benchmark, conducted using the Project VRC framework, where it compared single server VM density achievable by XenServer 5.5, Hyper-V 2008 R2 and “another” hypervisor with XenDesktop 4.
Citrix cannot publish the name of the third hypervisor because of the VMware EULA, but it clearly is ESX 4.0. 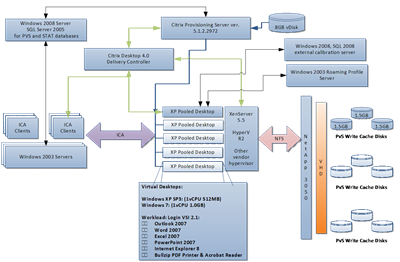 The results are rather interesting: Citrix has no problems in admitting that Hyper-V R2 performs better (10% more) than XenServer when serving Windows 7 vitual desktops, while the opposite is true with Windows XP virtual desktops.
In both scenarios, ESX 4.0 is behind XenServer 5.5: