Yesterday Microsoft announced a number of new technologies and initiatives around desktop/server virtualization and VDI.

The 35-pages document describes a benchmark executed by Microsoft to compare I/O performance of files inside its Virtual Hard Disk (VHD) format (both fixed size and dynamically created) against files inside raw disks and files inside the NTFS file system.

Tests were executed on systems running a number of different workloads, including SQL and Exchange.
Microsoft explains that compared to previous implementations, VHD support is native inside Windows Server 2008 R2 and thus is not depending on the presence of Hyper-V:

…the impact of the Windows hypervisor is quite small based on past experimental results. This is mainly due to the fact that performance critical workloads are re-directed to synthetic VMBus channels instead of using the longer emulation path. To get the most accurate CPU utilization and to focus on native performance, the Windows hypervisor is turned on only during VHD performance measurement in Windows Server 2008 which is required to mount VHDs on a Windows Server 2008 machine while it remains off for all other performance testing scenarios… 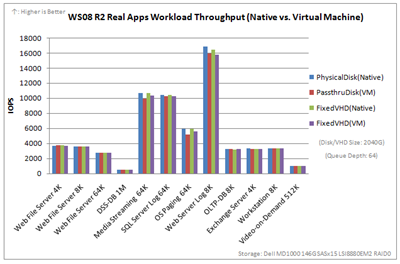 The paper closes with an interesting table listing the pros and cons of different storage containers for Hyper-V.