The company published an extensive explanation of how the new component works on its corporate blog:

vProfile is built entirely on top of the VQL language developed by Reflex. VQL provides a layer of abstraction from the database and the virtual infrastructure which makes it very simple to provide configuration management capabilities for anything that VQL can represent.

In the initial release of vProfile we support three major types of targets:

For any target (vCenter, Host, or VM) of configuration, some common capabilities are supported. The user Interface provides the ability to:

For each of these major target types we support configuration visualization, baselines/profiles, scheduled & ad-hoc remediation, and extensive enterprise reporting…

By “configuration visualization” the company means an interesting heatmap like the following: 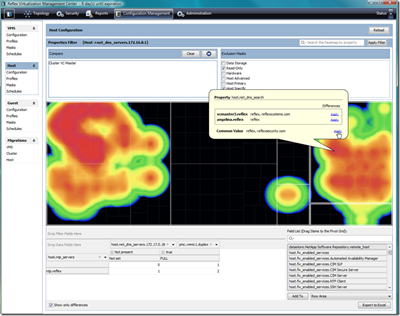